Lox Terrine, with Piccalilli and Mizeria 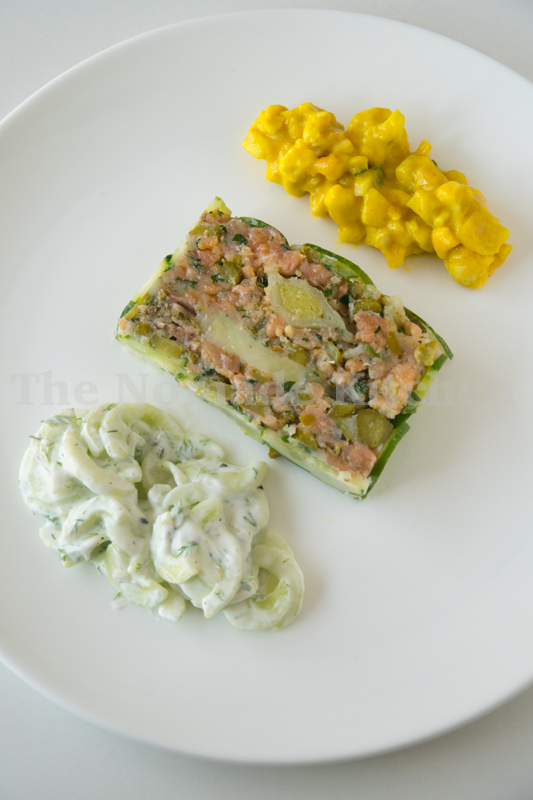 Lox terrine, with Piccalilli and Mizeria.

What is half French, half British, with a Polish accent?
No, it's not the doctor, it's my terrine for  Giuliana and MTC. 😊

First of all, I have to warn you, it's a very long job. It took 4 days to do it, but it can worth all the time spent in the kitchen.
Second, This is a real Nomad recipe. It has some of France (the terrine itself), some of England (the piccalilli) and some from Poland (the Mizeria Salad).
The idea came quite quickly. The difficulty was finding some of the ingredients in New Delhi Jungle of markets and little stores.
When I told Ele I wanted a wild salmon fillet, you can't imagine her face. But, as she always is optimist she told me that she would find it and maybe knew where. And finally she did.
The unexpected Odyssey was for the English Mustard powder.
-India is the country of mustard-she said.
-Yes, but...  it's really not the same for the piccalilli.
I know, she has patience just because she loves me, otherwise...😉
Well, Imagine to traverse a 23 millions inhabitants city, from north to south, east to west, only to find a little, tiny, yellow box of mustard.
Unbelievable in an ancient British colony, but true.
We finally found it, by a friend of her in the British High Commission. I had al last all the ingredients to start the long process of this terrine.
In the first moment, I imagined it entirely covered of lox. While I was mixing the ingredients, I changed my mind as I thought that it would be nicer and lighter folded in cucumber slices.
The clarified butter gives a nice taste and a spreadable texture, in addition to keep the terrine together.

Make your lox at least three days ahead.


Start washing your salmon and ensure all bones are removed. If they are not, just take a plier and pull the bones off.
Mix salt and sugar in a bowl and cover the fish with this mixture. Be generous, because the fish will absorb part of the salt mixture during the curing process. Next, wrap the fish in plastic and put it on a shallow dish (can be a pyrex). Put in the fridge with a weight on top. I used a large heavy dish with two wine bottles on top.
Check the salmon every 12 hours and eliminate any excess of liquid.
After 48 hours, you can check if it's enough cured to your taste. Normally, I prefer it a little more salty and consistent, which I achieve after three days.
When you feel it's done, rinse it well and slice it thinly.

Notes:
-Once you cover the fish with salt, you can also put some aromatic ingredients such dill (the most common), lemon zest, zaatar, onion, herbs, pepper, shallots.... I didn't this time just because I wanted a "pure" tasting lox.
-You can freeze your lox cut in slices, ONLY if you bought a fresh fillet. Do not freeze if you started with a frozen fish.
-Try with smoked salt for a smoked salmon taste ;)


Cut cauliflower in tiny florets. Peel, deseed and cut the cucumber in small cubes. Peel onions and shallots and chop roughly. Cut fennel and courgette in small cubes.
Mix all vegetables and soak in water and salt for at least 8 hours, or overnight.
Wash the vegetables and pat dry throughly.  It's very important that vegetables are dry before adding them in the mustard cream.
In a saucepan, mix the vinegars, the red chili and bay leaf and bring to a boil. Boil for 10 minutes, strain, discard leaf and chili.
Mix sugar, turmeric and mustard and add to the reduced vinegars. Mix well, cook for three minutes.
Allow cool, add the xanthan gum and make the mixture thicken with a stick blender.
Dip the vegetables and combine. Let macerate overnight.
Keep in a jar in de fridge until use.

*If you don't have xanthan gum, then mix 2 teaspoons cornstarch in the mustard mix before adding to reduced vinegars, and cook to thicken. I prefer xanthan just because it doesn't have any aftertaste.


Slice the cucumber as thin as possible. Some people also use to grate the cucumber, do as you prefer.
Put the slices in a colander and sprinkle with a pinch of salt. Let drain the liquid for about 30 minutes. In a bowl, mix cucumber slices with sour cream, vinegar and dill (you can save some dill for decoration). Put in the fridge for one hour. Season with more salt, if needed, and pepper to taste before serving.


Trim the green part of the leek. Ensure to cut it to the same length of the terrine. Blanch the leek in salty water until tender, drain and set aside.
Peel the potato and slice 1 cm thick. Melt 100 g of clarified butter, poach the potato slices and cook at very low temperature until soft but not overdone. The grease must to entirely cover the slices.  Potato has not to fry, not to take color, just be "confit", slowly cooked in the grease. When done, take out from the butter and allow to cool on a wire rack.
Chop the lox as a very fine "tartare". In a bowl, mix lox with the chopped shallots, cornichons, capers, chives and parsley.
Using the melted clarified butter in which you cooked the potatoes, generously brush the bottom and sides of the terrine. Finely slice the fresh cucumber and brush one side of each slice and stick the slices on the bottom and sides of terrine, to line it completely. The starch released by the potatoes will help cucumber slices to stick.
Melt the rest of new, unused clarified butter.
Start to layer the terrine with a first layer of lox mixture. Pour some of the butter and press the lox down.
Put the leek on this first layer, pressing a bit down, then cover with a new lox mixture layer and some of the melted butter. Lay down the potato slices on the length of the terrine. I've cut the round edges to make them line up, like one single slice. Push delicately down, being careful to not to break them. Cover with the last layer of lox mixture, pour another little amount of clarified butter.
Cover nicely with thin cucumber slices and finish with a little butter to fix.
Put your terrine on the fridge with an appropriate weight on the top, to press it overnight.

What I did, was to cut a customized piece of cardboard at the same size of my terrine container. I folded it with cling wrap, covered the terrine with it and finally put a bowl filled of river stones on it.
As the butter will harden in the fridge, take out your terrine on time to serve at room temperature.
Gently, scrap out the excess of butter from the top.
Slice the terrine when still hard, leaving the slices at room temperature.
Serve sliced, with piccalilli and Mizeria salad.

Notes:
-If you have time, use homemade clarified butter. It has a better taste and texture.
-MY MISTAKE: I should had minced the lox mixture more finely for a more refined result. The texture I got it's maybe right for a "terrine de campagne", but not for an elegant lox or smoked salmon one. Just my opinion. 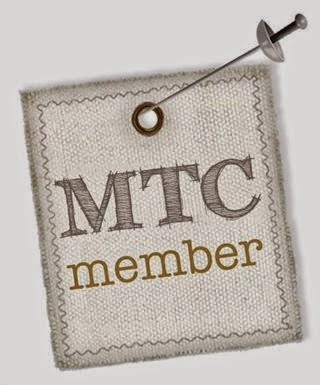 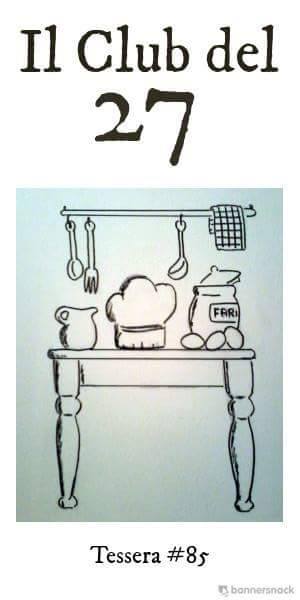